Your guitar amplifier is an essential tool for getting the best sound out of your guitar. But, with all those knobs and controls, it can seem a bit overwhelming at first. Taking the time to learn how to use your amp, and what all those controls do, will help you to get a legendary guitar tone every time.

In this guide, I’ll teach you how to use a guitar amp, including how they work, what the controls do, and some recommended settings to get you started.

What do guitar amplifiers do?

Before I get into how to use a guitar amp, let’s take a very quick look at what they do.

They work by taking the signal from your guitar’s pickups, processing it, and then outputting it through a speaker. The guitar’s signal first passes through the preamp and then the power amp before being output.

The preamp is responsible for shaping the tone of your guitar’s sound. You’ll find the equalisation knobs (treble, middle, bass) here, as well as the preamp’s gain knob. In short, the gain setting sets how distorted the guitar’s signal is. More gain means more distortion.

The preamp also brings the guitar’s signal up to “line level”, which increases the power of the signal. The signal then passes onto the power amp.

The power amp’s job is to increase the signal yet again. This time, it increases it to “speaker level”. This makes the signal powerful enough to make the speaker work. Here, you’ll set the amp’s master volume.

Luckily for us, most amplifiers are what’s known as combo amplifiers, meaning that the preamp, power amp, and speaker comes packaged together as one unit. So, you don’t have to think about all the different processes.

There are a few different types of guitar amplifiers available, but they mostly work in the same way.

How to use a guitar amp

Learning how to use a guitar amp is essential for any electric guitar or bass player. Not only do they increase your guitar’s volume, but they’re important in shaping the overall tone and sound of your guitar. 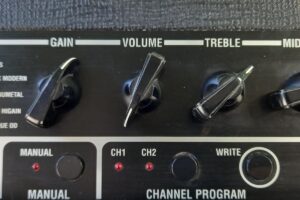 Set the master volume to zero

Before switching on your amp, ensure that the master volume is turned all the way down to zero. This makes sure that it doesn’t cause any damage to the amplifier or your hearing when it’s turned on. 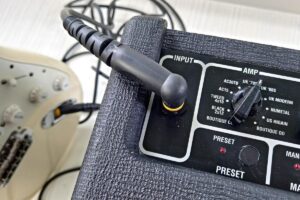 Connect your guitar to the amplifier’s input

Use a guitar cable to connect your guitar to the amp’s input. Make sure that the guitar’s volume knob is turned up. If it’s not turned up, then your guitar won’t make a sound. 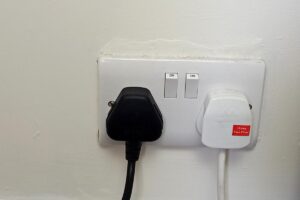 Plug the amplifier into a power outlet

Your amplifier will come with a power cable. Plug this cable into a power outlet, and switch the outlet on. On most amps, there will also be a power button. Switch this power button on. Some amps, like tube amps, have a “standby” switch. Turn the main power switch on first for a few minutes before turning on the standby switch. This lets the tubes warm up. 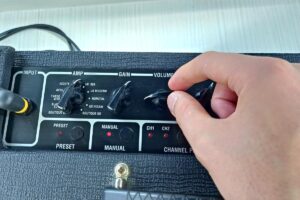 Now that the amp is turned on, slowly increase the master volume to a level that sounds good for you. Guitar amps can get very loud, so make sure to turn it up slowly. 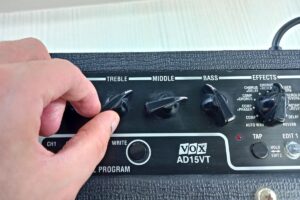 Adjust the controls to shape your tone

Most amps will have a gain knob that can increase or decrease the amount of distortion the amp has. Amps also have bass, middle, and treble settings that adjust the frequencies of the sound. Your amp may also have additional controls that can shape the tone further, or even built-in effects and different amp types.

If you take a look at any guitar amp, you’ll see that they have a lot of different knobs. These knobs are used to change the sound of your amp.

The knobs go from 0 to 10. The more you turn them up, the more intense the setting is.

The types of knobs will vary between amps, but most amps will have the following knobs in common:

Let’s take a look at these different controls and see how they work.

On a guitar amplifier, the gain knob is used to set the amount of distortion. On some amps, it’ll be labelled as “drive”. It works by changing the strength of the signal that’s input into the preamp. The higher the gain, the stronger the signal is, and the more distorted the sound will be.

Gain is often confused with volume. While they’re similar in what they do, think of gain as shaping the tone of your sound – not the loudness.

Genres like rock and metal tend to use high gain settings to get that crunchy, gritty guitar tone. Other genres like blues and jazz benefit from smaller amounts of gain. This will create a soft distortion that warms the tone of your guitar, without overpowering the sound. For cleaner playing styles, like country, you’ll want a lower gain setting.

The equalisation controls (usually called “EQ”) control the difference frequencies that your amp makes during the preamp stage of processing. Most amps have EQ knobs for bass, middle, and treble.

This is called “3-band EQ”, as each of the knobs controls a range of frequencies.

The relationship between these knobs changes from amp to amp. In most cases, changing one knob will also affect the other knob. For example, increasing the bass might decrease the treble.

Your amp might have some additional EQ knobs, too. Here’s a few of the more common ones:

The volume control adjusts the output of the power amp. This sets the volume of your amplifier. Increasing the volume knob will make the amp sound louder, and decreasing it will make it quieter.

This knob doesn’t affect the tone, only the volume. So, all you have to do is set it to a volume that you’re comfortable playing at.

What settings should your amp be?

Now that you know your way around your amplifier’s controls, let’s take a look at some setting suggestions. I say “suggestions” as there’s no golden rule for amp settings. The only rule is: use whatever sounds good to you!

That being said, there are a few general settings that get you in the ball-park of a style or sound.

Top tip: Your amp is only one part of your guitar’s sound. Your guitar has volume and tone knobs that are just as important in getting a great sound.

Settings for a clean tone

Pretty much every genre uses clean tones, so it’s an important setting to know. They can sound bright and jangly, like in country music, or they can sound warm and mellow, like in jazz.

Here’s how to get a basic clean tone on your amplifier:

These steps will get you a basic clean tone from your amplifier. From here, you can experiment with the different EQ settings and effects to find a clean sound that suits you.

Settings for a light rock tone

When I say light rock, I’m really talking about overdrive and crunch. This is where your amp just starts to break up and become distorted.

Here’s how to get a basic crunch tone from your guitar:

For this setting, I recommend increasing the middle as it makes the tone sound dry, which is great for crunch. A little bit of treble will help it cut through a mix, and is great for lead guitar.

If you decrease the gain, this setting also works great for blues and jazz.

Settings for a hard rock tone

Now we’re starting to get into the high gain territory (hooray!). The trick to a good hard rock tone is to get a gritty tone that isn’t too shrill. It’s a delicate balancing act, but you’ll get the hand of it the more time you spend practicing.

Here’s how to get a basic hard rock tone:

I find that the treble knob can make or break this sound. By keeping it around 12 o’clock, you’re making sure that the distortion from the gain doesn’t get too tinny, but still has plenty of bite.

Settings for a metal tone

The key to an authentic metal tone is scooped mids. Imagine taking an ice-cream scoop to a frequency diagram and scooping out those middle frequencies. Once you’ll hear it, you’ll instantly recognise it as a metal tone.

Here’s how to get a basic metal tone from you amp:

This gets you instantly into Metallica territory. If you’re having trouble getting a high enough gain setting, try picking up a distortion pedal to help get you closer to the sound.

If you’re looking to shred, I recommend using this amp setting with your guitar’s neck pickup.

All guitar amplifiers are different, and some come with more features than others. Some may have different channels, which produce different sounds. Some may have built-in effects. Others, like modelling amps, will have a control to select the amp type you want to model.

Let’s take a look at these additional controls in some more detail.

Channels are essentially different ways that your amp processes your guitar’s signal. Every amp has at least one. But, some amps have more than one channel – usually two. Think of it like having two slightly different amps in one.

Most of the time, the channels will be numbered – but sometimes they’ll be named. The channels on my Vox AC15C2 were named “normal” and “top boost”. Plugging my guitar into the normal channel processed the signal normally, and connecting it to the “top boost” channel increased the higher frequencies.

Some amps, especially those aimed at beginners, will have built in effects. These are a great way to experiment with your sound before exploring effects pedals. Here’s a few of the common effects you’ll find on these types of amps:

This setting is exclusive to modelling amplifiers. It lets you choose the type of guitar amp that you want to emulate.

These controls are very straight forward. Selecting a different amplifier model will change the circuit that your guitar signal is processed through, making it sound like that amp. The amps modelled will usually be famous models of amps, or generic sounds like “rock amp”.

Modelling amps are great for beginners or those of us looking for different amp sounds without having to spend a bunch of money!

Learning how to use your guitar amp is a critical step in learning to play the guitar. Now that you understand what the different controls do, you can craft a sound that’s unique to you. Or, you can make some adjustments and emulate your guitar heroes! The possibilities really are endless.

Once you’ve got to grips with the basics, you can shape your tone further by looking at guitar effects pedals that give you more tonal options.

Just remember: there’s only one right setting for your guitar amp – the one that sounds good to you!

There’s no sound coming from my guitar amp?

If your guitar amp is switched on but you’re not getting any sound, try the following steps:

Through this site, I'll provide you with helpful info, how-tos, and reviews on everything I know about musical instruments, production, and equipment that I actually use.

My aim is to save you the time it takes to research and answer music related questions, using my real-life experiences.